Our First Visit to Mpangeti Village

What a day. We accomplished many things in a Sunday day trip to Mpangeti.  Below is a summary of the key events:

We arrived in the village around 10am. The local Faith Works Dynamite Church (FWDC) in Mpangeti is one of the older church plants (15 years old). We were warmly greeted by the women and children with a few welcome songs. We were then led under a canopy of 4 trees to the church. They do not have a building. However, they have purchased land near the main road to build a building next year.

Their culture dictates that women and children sit apart from the men. This seating arrangement occurs in all of the over 100 FWDC churches in Malawi and Mozambique.  Prince told us that he is trying to break some of these cultural norms for the sake of the gospel.   However, it is a slow process.

There were many visitors for this church service. The local village chiefs and several head men (chiefs over multiple villages) were seated. There were also multiple pastors from other FWDC churches in the district. There was also the area FWDC District Superintendent of FWDC from Nsanje (south near the Mozambique border).

Worship comprised multiple songs in Chichewa accompanied by a tom tom drum and shakers made from old spray cans. Prince would lean over for each song and provide the chorus of the song in English. I noted that the crowd really worshipped. Some danced. May sang with great intensity.

Next: Introductions. Despite the very raw conditions, there was much formality. The introductions was one of those events. Each chief or head man was individually introduced in order of rank. The crowd clapped in respect for each man in authority. Then each pastor was introduced. One by one the pastors had something to say. Then each would invite his wife to come to the dirt center stage to be recognized. Stacey noted that the women did not seem particularly enthused about the recognition or the hug from their husbands. Prince later said that Malawians are not huggers. Finally, Prince was introduced. He made a few remarks and then introduced me in order to introduce Stacey. I gave Stacey a great big hug. Fortunately, she hugged me back. Americans are huggers....

Finally I got up to preach. I spoke on John 15 concerning the vine and the branches. Prince translated for me. The crowd responded with applause when I made a salient point. I also generated a few amen's. I sat down at the conclusion and Prince gave a call for people to receive salvation. There were about 8 people that responded. Then Prince and I prayed for people with people who were sick. I asked Stacey how long I preached. She said, "Too long". You preached the whole bible." She is generally right. It felt like 30 minutes max. Oh well.

Prince followed up and did the alter call. Eight individuals stood up to receive Jesus as there Savior.  I was thrilled.   Prince prayed for each person and then they returned to their seats.

Prince then asked people with illnesses to come forward for prayer.   Prince invited me to join him.   We prayed for each person for healing.   We did not see or notice any supernatural healings on this day.

Prince received notice two days later that one of the men from the village was very challenged by the message.   He reported that he was unsettled after the service.   He recognized that he was not leading his family.  He subsequently rededicated his life to Christ.

The chiefs and village head men (Chief of chiefs) asked to meet with us privately after the service. That signaled possible good news or bad news. We had no idea. These leaders have significant power and control of their respective villages. We went to Pastor Kausiwa's home across the road. He had a covered area with plastic chairs. The chiefs and head men were seated and were ready to speak. They spoke in order of hierarchy of responsibility. The village chief's from the village and surrounding villages spoke first. The key messages from all of these leaders were:

I spoke to the chiefs and head men next. Prince again translated. I thanked them for their support, their wisdom and guidance and for the land that we purchased. I asked them to continue to support us locally and make sure the girls in the home are protected from any potential predators. I made no commitments concerning additional homes. We thanked them individually with a handshake for their time and effort.

This was a tremendous victory. We need the ongoing support of these men to be successful.

Meet The Girls And Guardians

The eight girls and their guardians were invited to join us at the home. They all sat on the floor in one bedroom in the house. We joined them and sat on plastic chairs. I sensed the awkwardness of the moment. Two mzungu (white people) strangers walk into the room.

I asked Prince to request that the girls introduce themselves. They each stood up and quietly told us their names, age and schools year. They were clearly uncomfortable.  Maria Zuzu (age 4 - the youngest) chose not to stand up. She got a pass.

The girls all had short hair. It is apparently easier to manage in this environment. They were wearing their best, maybe only, dress.  Culture dictates that women and girls in tribal villages wear dresses or skirts.

I asked Prince to interpret for me. I wanted to address the guardians. All of the girls have lost both their parents to HIV, other diseases and one drowning. The guardians were mostly grandparents of the girls. There were a few aunts present.

I thanked the guardians for joining us. Then I committed our best efforts to care for their family member. I explained that this is our first home. Therefore, we will make mistakes as we raise the children. I also explained that we will focus on the spiritual and education of the girls. I explained that we envision these future women to make a difference in their village, the district of Chikwawa and in the nation. The guardians applauded.

Finally, Prince asked the Guardians if they had any questions or comments. Silence. Then one grandmother spoke up. The message was thankfulness for taking and raising her granddaughter. She referred to her granddaughter sadly as a burden. Unfortunately, orphans are considered a problem rather than an opportunity to help family. The rest of the guardians had similar words to say.

We were invited to have a meal at Pastor Kausiwa's home before our departure. I was beat at this point in the afternoon (drained from preaching, intense sun, high winds). I told Prince that I prefer to depart, but I will enjoy the meal if culture dictates that we accept. We drove back through the village to Pastor Kausiwa's home. We were asked to wait outside while the meal was prepared. We sat and chatted with a few children that had followed us.

We then were invited into the home. It was very dark inside (no power). The hosts do not eat with the guests (culture). There was a table with four chairs. The meal was presented on the table. There was a chicken dish with little meat and bones, Nsima and some vegetables. We were presented with a container of water to wash our hands.

This food is considered the best. The pastor and his wife were honoring us with the best they have. Nsima is cooked corn meal that is formed into patties and cooked again. It has no taste. I have eaten Nsima numerous times in my previous trips. Stacey was a trooper. She "baptized" her Nsima with gravy from the chicken and ate about 1/3 of a Nsima patty. I watched her as she took her first bite. I on the other hand was just out of gas. I was disinterested in the food. I ate a few bites to pass the test. Everyone else cleaned their plates.

We departed the home and thanked the pastor's wife and family for the meal. "Thank you very much" translates to Chichewa as "Zikomo Kwmnbeiri". We were thankful and ready to return to Blantyre.

It was a great day In Mpangeti village. 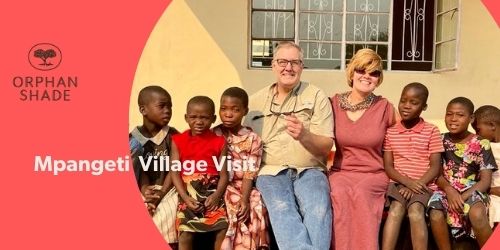 Contribute on my charity work by your donation.
2021 Ministry Report