Orphan Shade applied for a donation from Missionary Ventures International (MVI) for a used motorcycle for Pastor Prince Kampomo in Malawi.  The intent was a vehicle to facilitate ministry in distant villages, ministry to operating church plants and help transport people, food and supplies to various Orphan Shade foster homes.  We were subsequently blessed with a donation award from MVI In March 2020.  We agreed to provide pictures, stories and other information to MVI in exchange for the funds.

We can now report that 13 frustrating months later that not 1 used motorcycle was purchased, but four new motorcycles were purchased with the same donated funds.  How did Prince pull that off, you might ask?  I will tell you the story.

Prince enthusiastically began to shop for a used motorcycle or a “machine” in Blantyre.   He was interested in a Kawasaki (Well known and highly regarded Japanese brand).  He rode several bikes and engaged in multiple price negotiations.  However, nothing was just right.  Then Covid-19 hit Malawi in April/May 2020.   The government shut down the country and shopping just stopped.   Months went by.

The friendly folks at MVI inquired multiple times about the bike purchase and required documents.  I was frustrated as the middle man on the deal.  I had to explain why we had not yet spent the money.

Prince discovered the Lifo brand bike in July/August. The Lifo components are manufactured in China.   You can purchase a new Lifo in China for about $300 USD. A dealer in Mozambique has rights to buy the parts, assemble and market the brand in Southern Africa.   Smaller bike shops in Malawi buy the components, assemble and sell the Lifo bikes To consumers.

Prince and I discussed the opportunity in September 2020 and finally agreed to order multiple bikes with the donated funds.   The decision included providing the additional bikes to members of Prince’s leadership team that oversee multiple churches that are a fair distance from their home.

Prince negotiated with the dealer over time and finally ordered 5 bikes for 550,000 Kwacha (~$600) each.  No cash was paid or deposited.   Prince was promised deliver in October.

Prince went to the bank of the bike shop to pay directly into their bank account.   In the middle of the payment transaction, the bike shop manager called and indicated that the shop was closed and quarantined because many of the employees had contracted Covid.   Oh dear.... I became a bit unglued about the series of delays and miscues.  Prince and I Spoke via WhatsApp.   We agreed that we need to close this purchase in order to supply the agreed info to our donors.

Prince approached the bike shop in February to make the deal.   The manager advised Prince that some accessories were missing.   He told Prince to come back in a few weeks.   This process was again testing my patience.   In the meantime, crime in the country was/is increasing.   Motorcycles are good targets for thieves who are hungry and need to feed their families.   Prince was concerned about the machines being stolen.    I strongly encouraged to buy the bikes.   We will worry about theft later.

Prince approached the bike shop for one last negotiation in March.  Why? Prince discovered that the government had reinstituted a value added tax (VAT) on such equipment.  Therefore, Prince “asked for an offering”.   Prince is an expert at asking people for price concessions that will benefit the ministry.   He was successful.  Prince was able to reduce the price per bike.   Therefore, he was able to purchase 4 of the of the five bikes for 2 million Kwacha ($2,700.00 USD).

Prince, Susan and several men from the church helped pick up the machines In late March.  They borrowed a pickup truck to transport three of the bikes.  The picture on the right says it all.  Prince was so happy about the new acquisition.

It took 13 months for the transaction to get done.   We clearly learned some lessons along the way.  I personally learned how long things can take in their culture.    I will certainly apply the lesson as we prepare to go to Malawi in July. 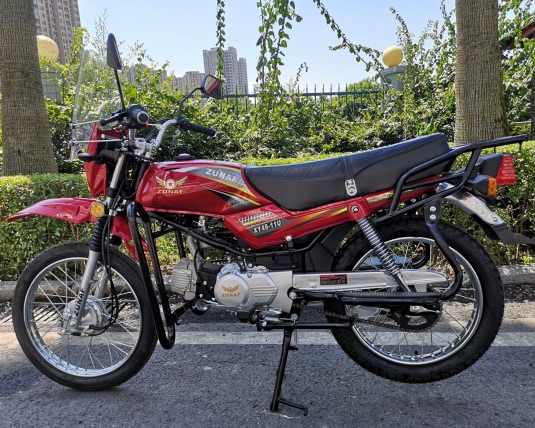 Contribute on my charity work by your donation.
Digital Media Team